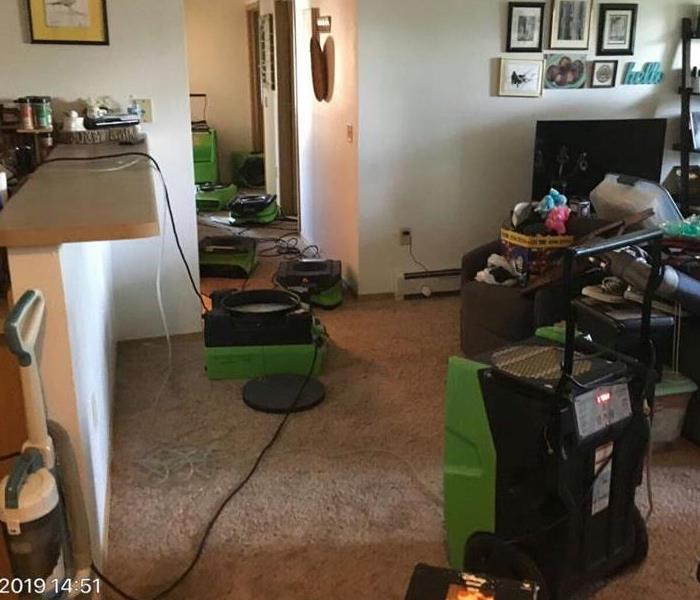 On Wednesday, July 17 we received a call from an apartment property manager that described a emergency water loss that affected two units, an upper and lower. Tenants living upstairs started a load of laundry and then went to work. While at work the wash machine failed to turn off and it continued to fill and spill over. Eventually the water migrated to multiple rooms in the upper unit. However, as expected, the bulk of the water damage went to the tenants living directly beneath.

Upon the arrival of SERVPRO and scoping the loss, it was quickly determined that both units were severely affected.  As you can imagine the tenants down below, a young couple, received the brunt of the water damage. Their apartment was severely effected and there was no way that this couple and their two dogs could continue to live there. Fortunately for them, the couple did have renters insurance.  It was then brought to our attention that the male tenant was in the Military and he pointed out that he was being deployed overseas in only 3 days! The couples' plan to spend the last two days they had together was now gone, and emotional devastation overtook them.  Todd, the owner of SERVPRO, stated that we would do everything in our power to help resolve this quickly. It is difficult enough to worry about your significant other being deployed overseas, but then having to worry about finding a new place to live and what to do with the two dogs and then having to move your contents out would be overwhelming for anybody. A burden we would not let our clients face alone.   With all the work that needed to be coordinated and completed, it takes time to accomplish all this. Overall, it the entire process took about 15 days. We are very happy to report that the job is now complete! The most gratifying feeling was knowing that we could help the Military couple and that they could spend as much time together with family and friends with a little less stress on their plates.