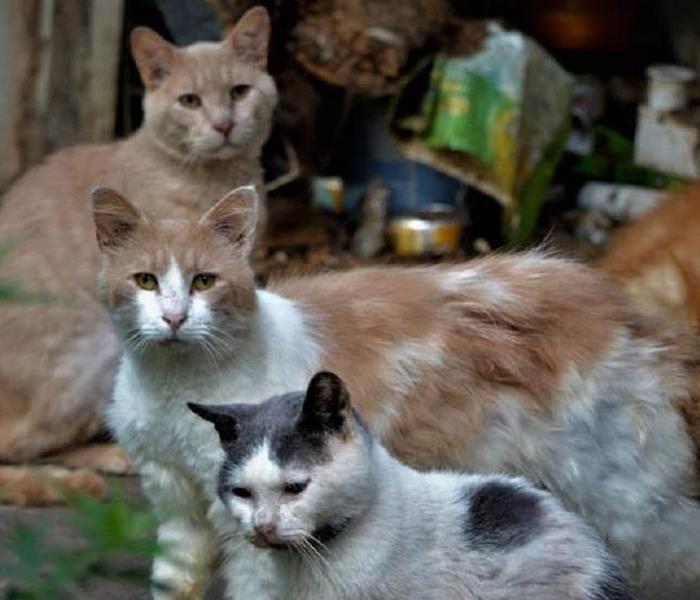 Cat hoarding is a very complex mental health issue that effects animal welfare, and is a serious public safety concern.

One night watching the local late-night news, a story came on about a woman who was evicted from her apartment for housing 27 cats.  The next morning, SERVPRO received the call from the property owner to help clean up and deodorize after this tenant.

Our customer was the owner of this building and this building was his childhood home. Due to its condition, the building itself was condemned by the City of Milwaukee.  However, the City agreed to let him try and salvage the structure because he did not want to lose this home.  That is where SERVPRO came in.  The home owner wanted SERVPRO to remove all debris and try to disinfect and deodorize everything.

Cat urine is one of the most difficult odors to remove.  This property smelled so bad that you could smell it from the middle of street in front of the home.  Not only did this lady love her 27 cats, but she also was a hoarder.

We went through five 40-yard dumpsters of debris; all coming from a home approximately 800 square feet.  That is a lot of debris.  There is one thing that was forgotten to be mentioned to SERVPRO; it was 27 LIVING cats that were removed from the home by the local Human Society.  No one mentioned the dead cats that were discovered in the home.  So, we had to remove those as well.

While removing the debris from the basement, it was discovered that there was a previous sewer back-up in the home that no one had any idea how long it has been there.  So now, we also had to do a sewage cleaning and disinfecting on this property as well. You would not believe the scent from this place.

After our attempt, we finally came to the conclusion that this home was beyond deodorization and repair.  The cat smell was so bad that it got into the hardwood floors, in the wood framing and many other structural areas.  SERVPRO, along with other related sub-contractors, tried to salvage the property but it just could not be done.

Within a few weeks after we left, the building was demolished.  Unfortunately, this is not a happy ending.  However, the moral of the story is that if you have rental property, it is wise to keep a close eye on your investment to make sure that the tenants treat your property with respect.